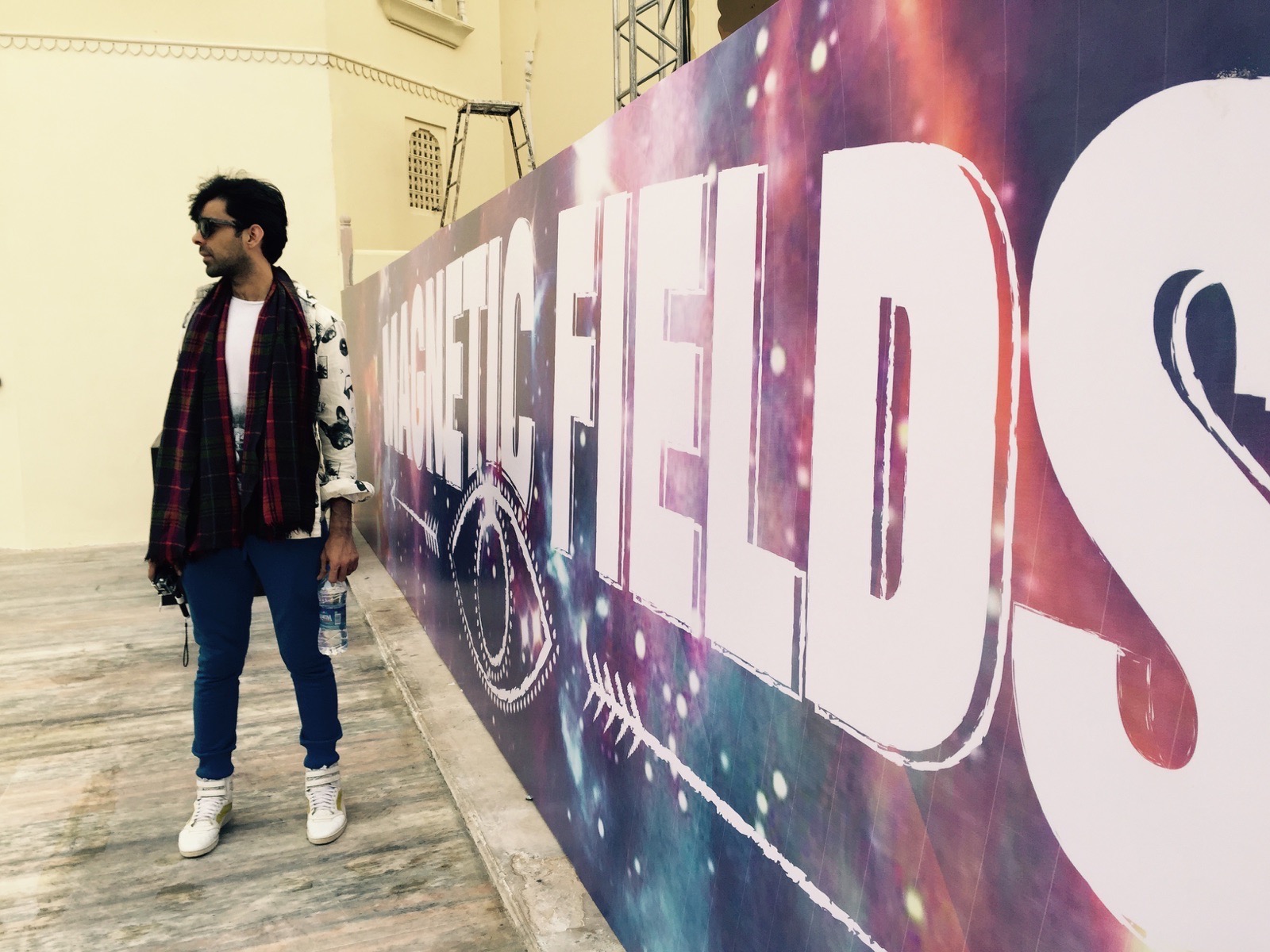 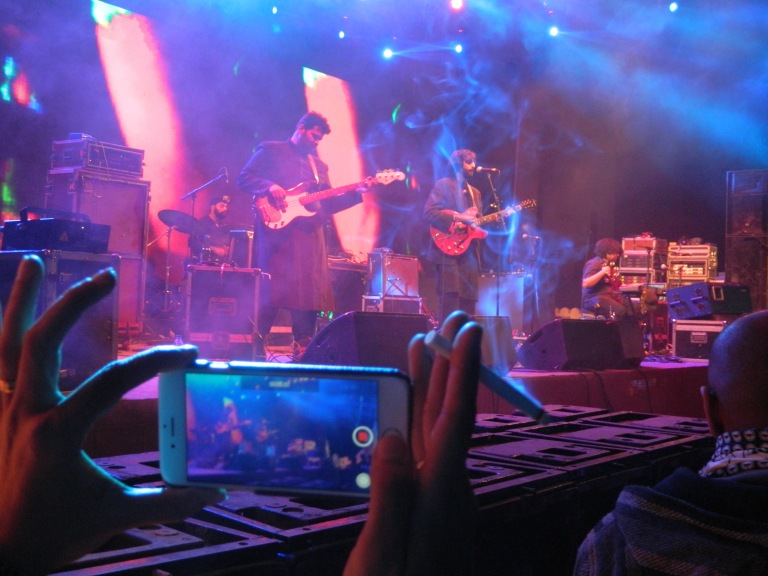 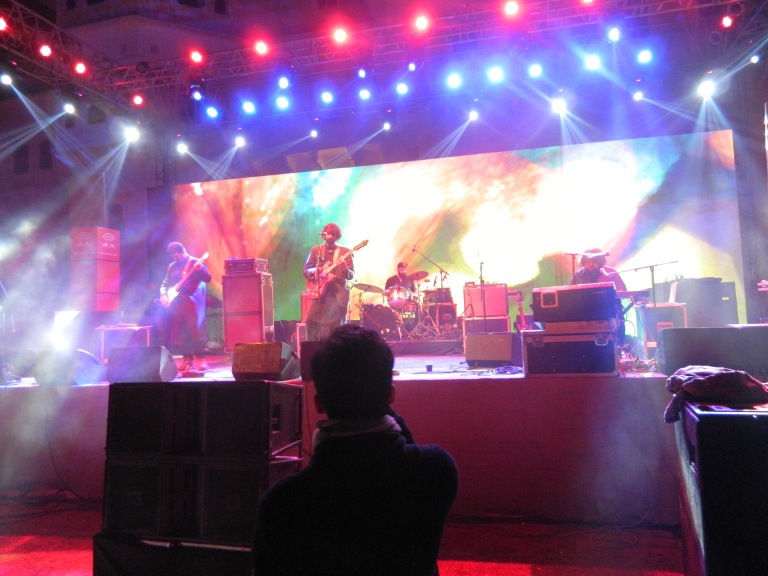 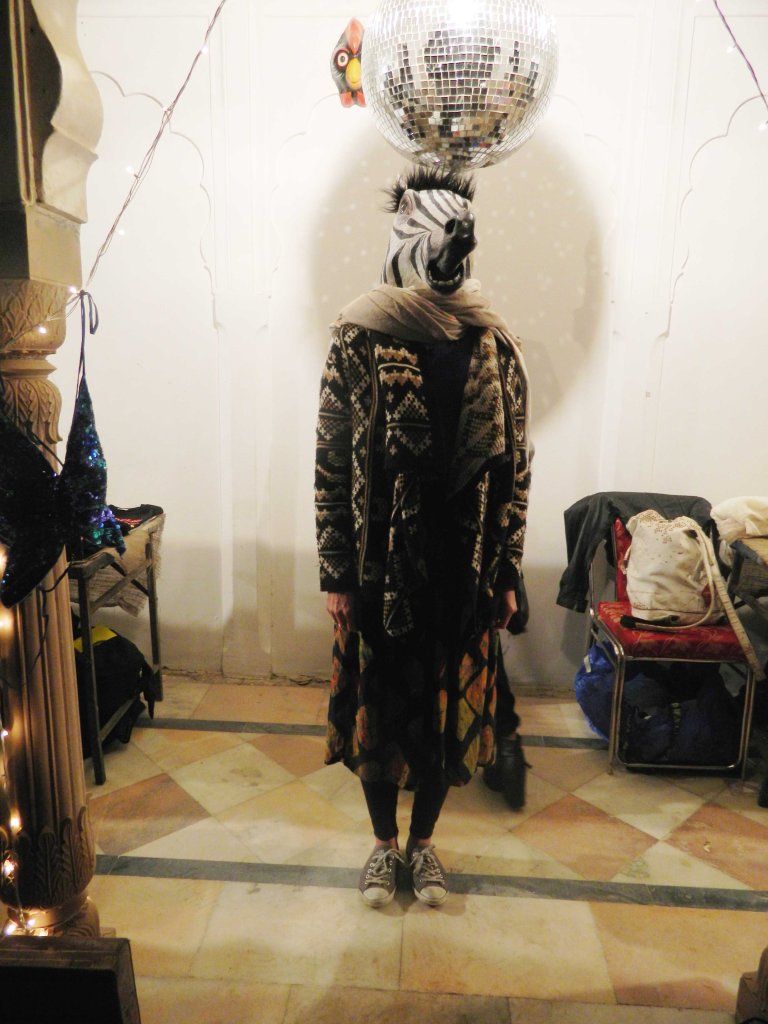 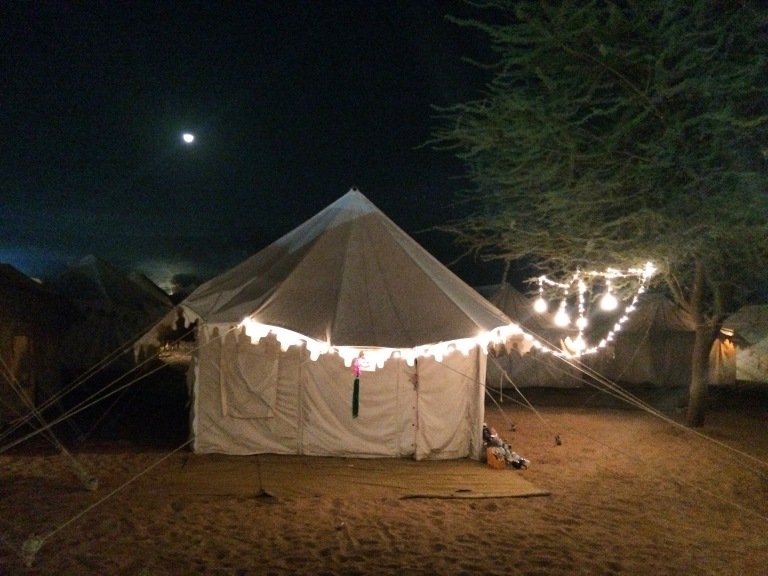 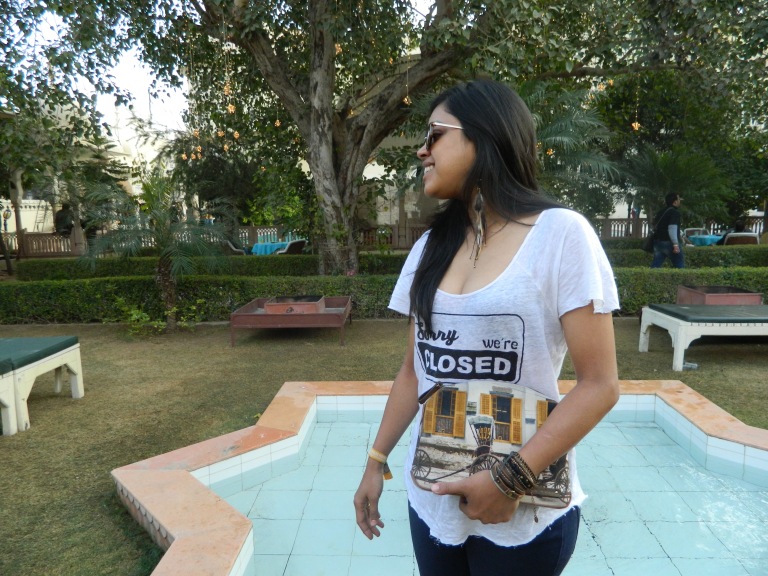 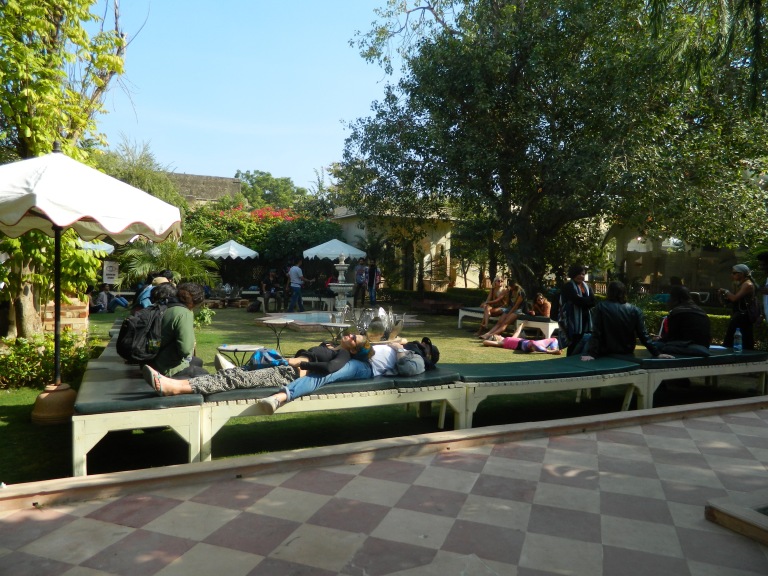 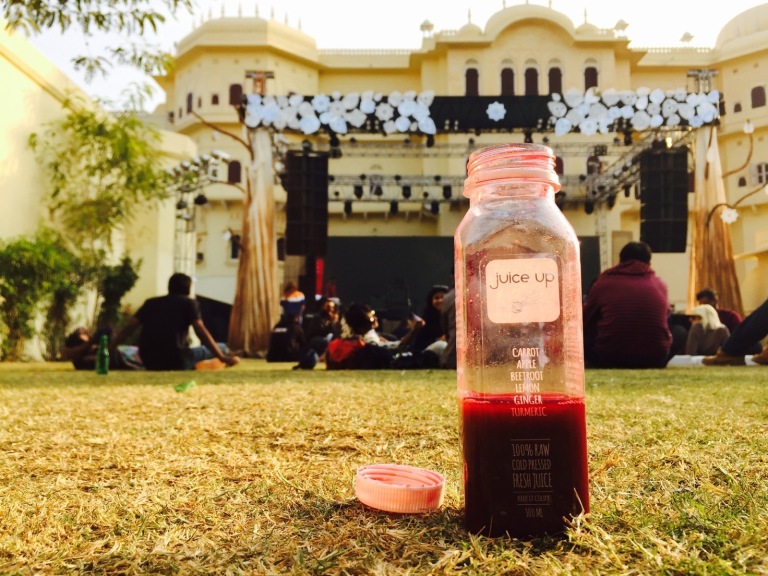 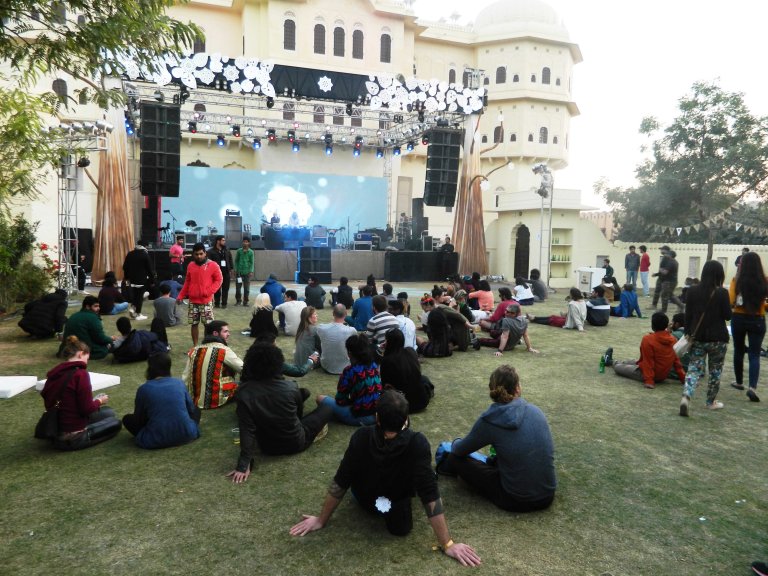 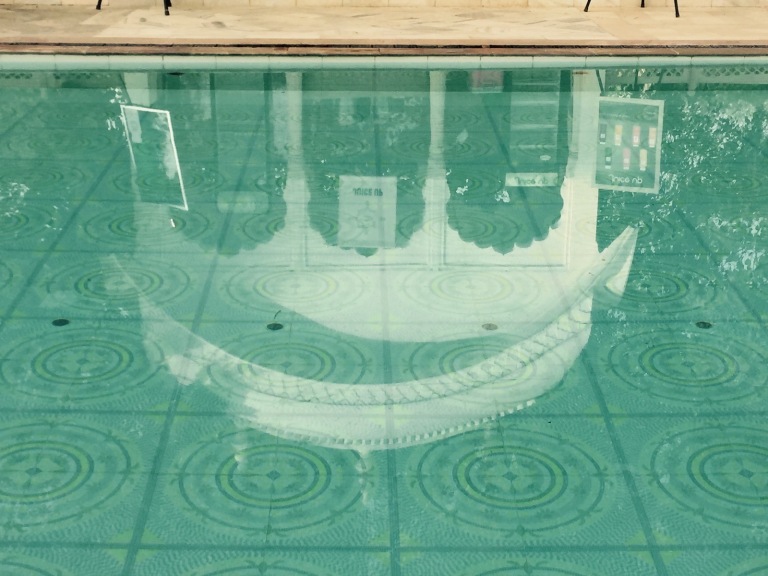 Before the last year got over, I did my first trip to a music festival. Magnetic Fields Festival.

It was a last minute plan and I decided to go with a friend(Rishabh) and Priyanka, who is now a friend too. We took my car and I was happy to be behind the wheel yet again. We followed the GPS and went a little off into the smaller towns on the way, but without too much hassle, thanks to the company I had, we talked, laughed and sliding through time we reached our destination. It was a six hour long scenic drive. Rajasthan has some beautiful sights and views to offer during your ride. The festival was hosted in the Alsisar Palace and the desert adjoining it. We reached in the evening around 8 and headed straight to the tents to check-in. There were rooms available in the Palace for booking prior which are royally luxurious but I was quite happy with the bedouin tents as well. It was impeccably organised right from the valet to the rightly numbered lanes and tents.

I was quite excited to be there as a blogger and I was looking forward to things right from the start. While walking through the sand towards our tent, we could hear the music playing in the palace already. The neat tents, the printed fabric walls posted on sticks, little bon fires and a good vibe from the festival crowd was setting the festival mood. We quickly put our luggage and got fresh to get out.

My favourite thing in the tent was the spacious restroom with hot running water. The desert is extremely cold in the night, so I had heard and I found no exaggeration there.

We were warned by Ruhi(magnetic team) so we came prepared to brave the cold and party. We walked from the tent area(desert) to the Palace exchanging smiles and following the sound of music. A small walk, good enough to give you a clear picture of the cold.

The palace was lit all around, it looked magnificent in all its heritage and beauty. I imagined the sets of a Bhansali film walking around. The romance of an Indian Palace is spellbinding and a music festival inside one is like a dream.

Quick bite at the food court and we were ready to begin the groovy business.

There were three different party areas in the palace. I loved the idea of party shifting from one spot to another after an act got over. There was the courtyard where the first night we danced non-stop for almost 3 hours. Five stars to the festival for the backdrop visualisations. They were completely mind blowing.

The second area was the lawn which had a bigger and broader stage for the performance and the visualisations played right behind the artists. That was my favourite party spot.

The music went on till morning but we crashed around 3:30 am.

The next day we got up early with sun toasting the fabric of our tent, giving the beautifully dispersed light inside. We lay in the sun right outside our tent. Rishabh played the guitar and me and Priyanka just chilled and lazed since we lacked the talent to add to his tunes.

There were more such parties outside other tents as I think others too wanted a piece of that sun basking. Even though the music began early, we were preparing ourselves for the evening. When its dark and faces are not so easy to recognise.

Later we roamed around the festival area and the palace in the day time. Met friends, made friends, ate food, clicked pictures, admired some beautiful people, made some conversations about life and such.

The evening started my party with RATATAT and I really enjoyed this act. I am already following them on Soundcloud. This night was quite crazy as we partied non-stop till morning. I missed the dungeon party. which was in the dungeon of the palace. True to its name, the dungeon was a torture chamber before, though I heard the party there was anything but a torture. Damn it! I still wish I could have caught up with that.

The spirit of a music festival can be seen in everyone and everything. The second morning was the same. Bright and colourful. The cold had started to tick me off a little as there was no internal heating in the tents but I tried to make up for that in the daytime with the sun toasting everything in the desert.

My third day favourite act was HVOB. Live vocals and drums and mixing. The girl has a beautiful enchanting voice. No wonder they are called ‘Her Voice Over Boys’. The party went on from one spot to another with everyone fixing their drinks in breaks at the bar and refuelling for the next act. Towards the morning time, BLOT took over and I think  they had everyone dancing to their groovy tunes. It’s a shame that I had never heard them play before as I stay in Delhi but I am glad I did at the festival and they are quite good with their music.

The festival passed by so fast and the morning was here. We had to leave. I am thankful that I was blessed with awesome company of Rishabh and Priyanka. Priyanka was a great support even for the blogpost. She even clicked some pictures that you see above. I also met quite a few people who are doing something similar as me. Left their well set corporate jobs and chase their dreams or some who are contemplating doing so. There was a certain like-mindedness in the crowd. Everyone wore a smile. Everyone seemed ecstatic and partied hard. I had a great time and given a chance to cover Magnetic again as a blogger, i would love to.

For now, I plan to travel more as the more you venture out, the more enriched you are as a person.

“we travel not to escape life, but for life to escape us.”_Anonymous